What is your top reason for choosing a particular breed? Human nature suggests looks are near the top of the list, followed by emotional factors.

You likely aren’t choosing a German Shepherd over another breed because you need a police dog or help sniffing out illegal drugs in your neighborhood.

Is appearance the entire picture, though, when trying to decide which puppy breed to add to the home? What about critical traits like temperament or health?

German Shepherds are the second most popular breed in the US. Do people pick them because they live for a long time?

So what affects the health of a German Shepherd and its life span?

We’ll take a closer look at health and behavioral issues that can shorten your dog’s life, as well as what you can do to help it live a longer, happier, and more comfortable life. 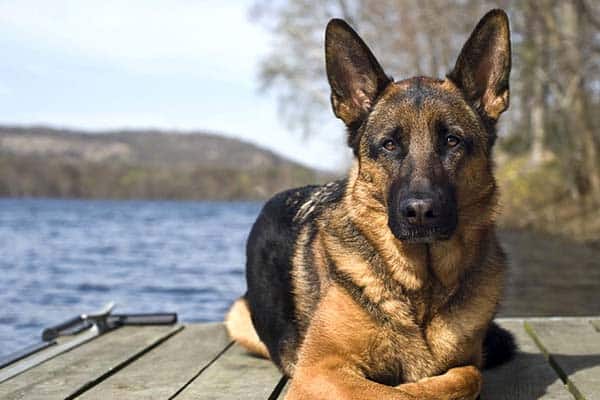 How Long Do German Shepherds Live?

Is lifespan Important When Choosing A Dog Breed?

When people consider a dog breed, you might think a short lifespan would be a deal-breaker. According to data compiled by Companion Animal Psychology, longevity is outweighed by other factors.

Potential dog owners may even overlook health and behavioral concerns of particular dog breeds in their quest to have a certain type of dog.

Dog owners worldwide recognize the health issues of the English Bulldog, French Bulldog, and pug, to name a few. Despite this, these snub-nosed dwarf dogs are still super popular.

The German Shepherd’s health problems aren’t as drastic, but the breed suffers alarming problems from the increasing demand for a particular look.

What leads to the increasingly poor health and correspondingly shorter lives of some of the most common dog breeds?

Irresponsible breeding, commonly through line-breeding and inbreeding, has led to a dramatic rise in detrimental diseases that are passed from one generation to the next.

Inbreeding drastically shrinks the gene pool. Diseases are often recessive traits, only showing up if a puppy receives two copies of that one gene.

The probability of expressing recessive characteristics skyrockets as the number of genes decreases.

Of course, breeders never sought to create crippled dogs or to promote pets who always gasp for their next breath.

By aiming for a particular appearance, they unintentionally selected defects and disorders.

These issues are attached to some of the same genes that would produce roached backs or wide heads.

The ongoing demand for extreme features perpetuates poor breeding at the expense of canine health and longevity. What Are Line-breeding And Inbreeding?

Inbreeding is mating two related individuals, with the intention of propagating a certain phenotype or gene expression that can be seen.

An example of a phenotype is a blue hair color or a curly tail.

Line-breeding is a form of inbreeding, usually attempting to cross dogs who aren’t as closely related.

An example of a close inbreeding would be mating a dog with his sister, while line-breeding might cross a stud with his grandfather’s offspring.

According to the RSPCA, all forms of inbreeding can lead to an increase in inherited disorders with a loss of genetic variation.

Other well-documented effects of inbreeding are compromised immune systems and shorter life spans.

Max von Stephanitz, the founder and initial developer of the German Shepherd, engaged in generations of line-breeding.

There’s no telling how many dogs he selectively removed because of various defects or problems. He ultimately obtained one of the most versatile and functional working dogs the world has known.

Two of the German Shepherd’s most valuable working traits – good limb angulation and long backs – have become so exaggerated through inbreeding that it has compromised the dog’s ability to move efficiently.

Ironically, conformation compromises the show dog’s performance as a working animal, but an even larger concern is shortened German Shepherd dogs lifespan.

How Fast Do German Shepherds Age?

You’ve definitely heard the saying that one year for a dog year is the equivalent of seven human years.

While this is roughly true of older dogs, the rate at which a German Shepherd age isn’t the same every year.

A German Shepherd begins adolescence between five and eight months of age, and continues until adulthood at around 18-24 months.

Therefore, the AVMA estimates that your puppy’s first year is equal to about 15 years for a human. When your Shepherd reaches the age of two, they’re about 20 to 24 in human years.

From then on, your dog ages about 5 human years for each of their own years. Relative to a human, a ten-year-old German Shepherd is about 63 to 70 years old.

German Shepherds between the ages of nine and eighteen months can be especially hard to handle if they haven’t been spayed or neutered.

If dogs can survive their first year, they’ll have a higher chance of living out their normal german shepherd lifespan. Things that can happen in the first year:

Everyone inevitably reaches an age where their health begins to decline. Some disorders in German Shepherds are hereditary and presumably preventable, while others aren’t. A substantial number of diseases that affect canines may force the ill dog’s owner to weigh their quality-of-life concerns.

Diseases like hip dysplasia aren’t imminently fatal, but if your dog can no longer walk or constantly soils himself, you may decide their quality of life is unbearably poor.

Inflammation and damaged cartilage can lead to arthritis, which is progressive and may become extremely painful. Arthritis is one of the most common reasons people euthanize their dogs.

Many dogs are destroyed in the prime of their lives for hereditary behavioral and mental issues that lead to biting people, killing other animals, and otherwise proving to be uncontrollable.

The esophagus is abnormally dilated, causing digestive issues. Many dogs accidentally inhale food as a result of this disease and can die from resulting pneumonia.

Often linked to megaesophagus, Myasthenia gravis is a neurologic immune disorder. It’s similar to hip dysplasia in that it has definite genetic markers without which it wouldn’t manifest.

However, it’s difficult to eliminate, like dysplasia, because of environmental influences and asymptomatic carriers.

If seizures become refractive, or uncontrollable with medication, your adult dogs can’t live a normal and happy life.

Yet another disease with genetic markers, degenerative myelopathy, according to the Universities Federation for the Welfare of Animals (UFAW) of the UK, is a progressive and chronic wasting disease of the nerves of the spinal cord.

It eventually leads to complete paralysis of all limbs. Symptoms most often begin when your dog is eight or nine years old. The disease is painless but eventually completely debilitating.

Shepherds generally only live one year with the disease before their owners put them down.

The bony segments of the spine (and vertebrae) can degenerate and cause paralysis.

This German Shepherd illustrates the early stages of degenerative myelopathy. Paralysis commonly starts with a loss of sensation as shown by the improper placing of the hind legs and weakness (known as ataxia) of the hindquarters.

Note, she seems unconcerned by her condition. It’s difficult to tell her age from this video but she acts like an older Shepherd.

However, one symptom of DM is fatigue or lethargy. With perhaps a slight graying around the muzzle, she’s probably eight or nine years old. German Shepherds are vulnerable to a host of problems that can prematurely shorten their lives, but not all is gloomy.

You can work proactively to help your German Shepherd live their life to the fullest with a reasonable expectation for optimal health.

Buying your dog from a reputable breeder may decrease the incidence of elbow and hip dysplasia. The AKC recommends screening X-rays for German Shepherds in breeding programs.

Conscientious breeders will also pay attention to the temperaments of their dogs.

Feed your Alsatian a high-quality dog food or raw diet under veterinary or nutritionist supervision. Optimizing the nutritional value of your dog’s food is one of the basic steps in preventing disease.

Many conditions arise from nutrient deficiencies if the dog can’t absorb or digest the vitamins and minerals. The more balanced, high-quality, and natural a diet is, the more bioavailable the ingredients are.

Consider preventative nutraceuticals such as joint supplements, omega-3 fatty acids, and antioxidants to delay the onset of degenerative diseases like arthritis.

Your German Shepherd should receive physical check-ups by a veterinarian multiple times per year. Remember how fast large dog breeds can age compared to humans.

Frequent checks may catch some diseases early when you can still treat or manage them.

Limiting food intake and paying attention to how you time feeding with other activities is vital to prevent GDV.

Physical therapy is crucial for arthritic conditions to increase mobility and range of motion. What Do German Shepherds Usually Die From?

Unfortunately, recent studies have found that German Shepherd dogs are most likely to die from complications that have been caused by breeding for cosmetic reasons.

Data that was collected from almost half a million dogs from more than 430 veterinarian clinics has concluded that the biggest cause of German Shepherd deaths was musculoskeletal disorders.

The second most common cause was found to be an inability to stand, which was often a result of lower hind quarters and sloping backs.

It was also found that 263 specific disorder types were recorded in the breed, and the most common types were inflammation of the ear canal, osteoarthritis, diarrhea, overweight and obesity, and aggression.

Unfortunately, German Shepherd dogs have been reported as having the second highest number of health disorders exacerbated by breeding traits.

They are also predisposed to conditions like an abnormal formation of the hip joint, cancer, and degenerative spinal disorders.

Awareness is growing regarding the detrimental effects careless breeding and exaggerations of specific physical traits are having on purebred dogs.

More experts are moving towards different approaches to registry standards, and changing the public’s perception regarding canine health versus pet appearance.

Even the AKC has acknowledged the value of outcrossing. One huge accomplishment was the successful eradication of cystine urinary stones in Dalmatians with the introduction of English Pointer bloodlines.

The UFAW is optimistic that similar careful and patient selective breeding can eliminate hereditary problems such as degenerative myelopathy in the GSD over time.

My dog is losing weight at an alarming rate. Her canine is weak. She no longer chews bones

Hi Beatrice - have you checked for Pancreatic Enzyme Insufficiency (EPI)? My shepherd mix was losing weight rapidly when she was 10 years old. After a misdiagnose from her vet I searched her symptoms online and I found out about EPI. We started giving her the enzymes(look for Enzyme Diane), she recovered her weight and today my dog turns 14 years old <3 Good luck to your dog!